The Touchy Subject of Mockery

Comedy over the years has drastically changed in terms of content and reception. The jokes that were once hilarious are now deemed as offensive and in bad taste. So when is it okay to make these jokes?

Well, if you ask someone today, then the answer will most likely be “never.” Lately, a serious of articles from various news outlets have revealed that people are re-watching comedies from the early 2000s and claiming them to be racist, the most recent one being White Chicks the popular Wayan’s Brothers comedy centered around two African American agents who pose as Caucasian siblings during a weekend vacation in the Hamptons. At the time of the release, there were zero articles about racism regarding this movie. It was a popular topic, and many people participated in the jokes pulled from the movie.

Today, however, the reception is very different, and it’s not because the material has changed. It’s because the perception of comedic content today is now being viewed through goggles that will filter through every crevice of any work of art and pull out whatever might be moderately offensive.

The perception of art is never steady as it can be assumed that art is made for the audience of “now” or whenever the work was conceived. When Breakfast at Tiffany’s was released, there was no public outcry over the casting of Mickey Rooney as a Japanese landlord. The first time we even started to hear somewhat of a backlash was over the casting and reception of Memoirs of a Geisha which held an all-Chinese cast in place of the Japanese background of the demographic described in the film as well as the novel. However, this backlash was for reasons beyond Asian Americans claiming misrepresentation as it was over Chinese-Japanese relations and the thought of a Chinese woman portraying a Japanese woman despite bad relations between the two countries.

Today, any film that has miscasted a character that the public deems fit for a person of color receives national backlash such as the live-action production of Mulan which took the criticism to heart.

Has comedy changed? Or is it the way that people are viewing these comedians changing? Perhaps, the netting in the filter we shield our eyes with is getting finer and finer so that everything we see can have a million offensive points without anyone’s intention to do so.

The latest backlash goes to an Instagram user @officialbonnetchronicles who posted a video yesterday mimicking the Vietnamese women at a nail salon, accent and habits included.

I’ve skimmed the comments of the post in question. At first you see a handful of comments waiting for the backlash. Something like this is viewed as humorous at first glance, but you quickly see how this can be misconstrued. It isn’t even the things that offend us that get picked out, but today we are able to detect what might offend someone else. These comments are from supporters of this account, and they find the post funny. It doesn’t stop there though. 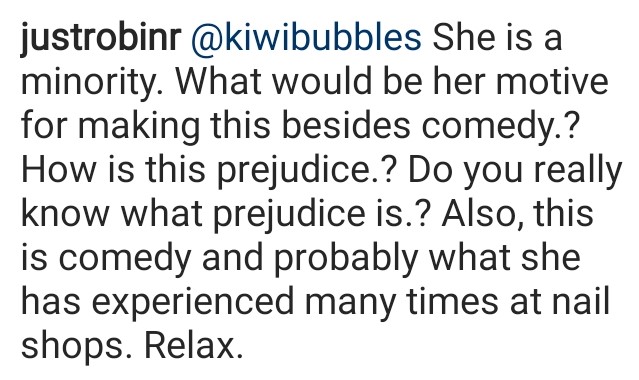 The next string of comments come from Asian Americans who relate to the post – not on the mockery side, but on the personal side.

Here’s where the line needs to be drawn.

I don’t think this is racist. As an Asian American woman but not of Vietnamese decent, I can attest that this is in bad taste, but it is not racist. I feel this way mostly because, honestly, this is an age long joke, and, if anything, we need to talk about how members of other ethnicities need to get over this “joke” and find new material because at this point it’s all recycled content.

However, while I don’t think it’s blatantly racist, I believe I don’t feel that way because I cannot relate directly to it. So, if I had been a Vietnamese person, I would see this as a racist act as I would be directly insulted. 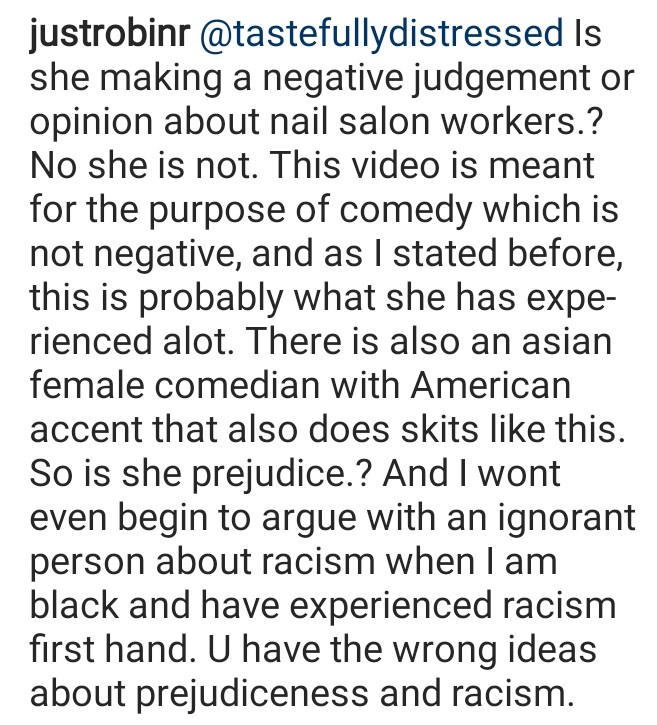 No person who does not directly relate to something like this can make jokes about it. It’s not like we haven’t seen this before when a young girl in Canada did basically the same thing except she recorded the woman she was mocking, saying that the woman was talking badly about her. The comments flooded with Vietnamese people who translated what this nail technician actually was saying.

Like I said, this is in bad taste. Any kind of mocking is in bad taste and obviously disrespectful simply because it mocks a very active demographic of every community. In my opinion, if you have time to mock these technicians, then find a place with non-Asian staff. If it’s “obvious” that these people are speaking badly of you, then, by all means, no one is forcing you to use their service. No one is forcing you to go there to spend your money. You have options. Any display of mockery that pokes fun at a particular aspect of a culture is in bad taste. The reason why this isn’t racist to me is because, while this woman is mimicking something that is honestly accurate, this doesn’t put any claim that she is better than any member of the Vietnamese community.

By today’s standards, the only grounds for being able to mock a certain group of people is if, in some way, you are also mocking yourself. As an Asian American, that means I technically can make these jokes, but if you dig deeper, I am not Vietnamese, therefore I can still very well offend someone. By those specifications, that isn’t racism – that’s just being an asshole. Discrimination by race versus ethnicity is still a gray area as race is specific to physical features and ethnicity pertains to ethnic and moral values. Racism would be the assumption that this woman cannot speak English because she is Asian.

This is a very sticky topic, but what needs to be said is that even though an action is taken with good intention (perhaps for a laugh) or maybe with no intention at all, if you think it can offend someone, just be safe and don’t do it. At least, don’t do it publicly especially if you’re an influencer and you’re subject to the opinions of literally everyone in the world.

Like I said, these jokes are old. Ching chong ling long ting tong – every Asian has heard this before. It’s not even racist anymore; it’s just really annoying. Get over it.

You don’t teach someone about racial equality and ethnic sensitivity by participating in the jokes. You lead by example. While it is not possible to be “ethnically” or “color” blind, it is possible to be aware of what you should and should not say especially in a society where almost anything can be a touchy subject. To avoid analyzing and considering the sensitivity level of your audience is to surrender yourself to the ignorance of the louder party – the aggressors.

One less person making these jokes can clear up an already foggy atmosphere.