Well, maybe not a bug problem – but a parasite problem.

It’s no secret that Starbucks is a coffee giant, and the benefits of the job definitely outweigh the work put in (at least on paper). They offer free schooling, Starbucks stock, and healthcare along with free drinks and a food item while on shift. Who wouldn’t want that?

There seems to be a misconception about what we do. Yes, like I said, on paper this is simply a job that involves making coffee in exchange for all these benefits. However, this is easier said than done. It’s not just the coffee – it’s the conversation and the extra effort. We are expected to ask about your day, to provide all the smiles we can afford, and to give as much concern to your needs just as a friend would. We are teenagers, young adults, 20-somethings, and 30-somethings who just need a job that will last until the morning so that we may be able to live our lives comfortably. If that means I must ignore my own stresses and my pulsing headaches to tend to your needs (no matter how grand), I will do so. This is my job.

The phrase “exceptional customer service” is without a doubt the most misused and abused term you can find next to the word “privilege.”

Let’s expose your parasite problem, Starbucks, and let’s see if it rings a bell.

Now, I’ve stood by as coworkers have been berated for things they weren’t even responsible for. I’ve seen customers throw hot coffee at a young boy’s face, and I’ve also witnessed managers step in to defend their baristas. I consider myself lucky to be at a store where my manager is willing to defend us like her own children, and this is what a good manager should do in an easily volatile environment such as this.

This is where the phrase “Sorry, I haven’t had my coffee yet” is translated to, “Sorry, excuse my actions. My lack of caffeine pushed me to call you a dumbass even though I don’t know you. I forgot you just got here and haven’t had your caffeine yet either.”

Side note: let’s get one thing straight. If I’m working a 5am shift, there is no way in hell that I am waking up an extra half an hour just so I can get a cup of coffee before my shift starts. I’d rather sleep as much as possible and still get to work on time. Just because I work in the house of coffee does not mean I’m able to walk around with a cold brew drip dragging beside me. Anyway.

Today, it was brought to the attention of a nationwide group of baristas that an injustice has occurred under the guise of “the customer is always right.”

The following story is about a fellow barista – we’ll call her *Lauren and how she lost her job because of a cup of coffee.

**A licensed store is a cafe that proudly serves Starbucks coffee but is not under Starbucks corporate.

**Starbucks will provide refills to customers who have not left the cafe as well as free refills to Starbucks Reward members. However, you must purchase a beverage first. Seems kind of like an obvious detail, doesn’t it? 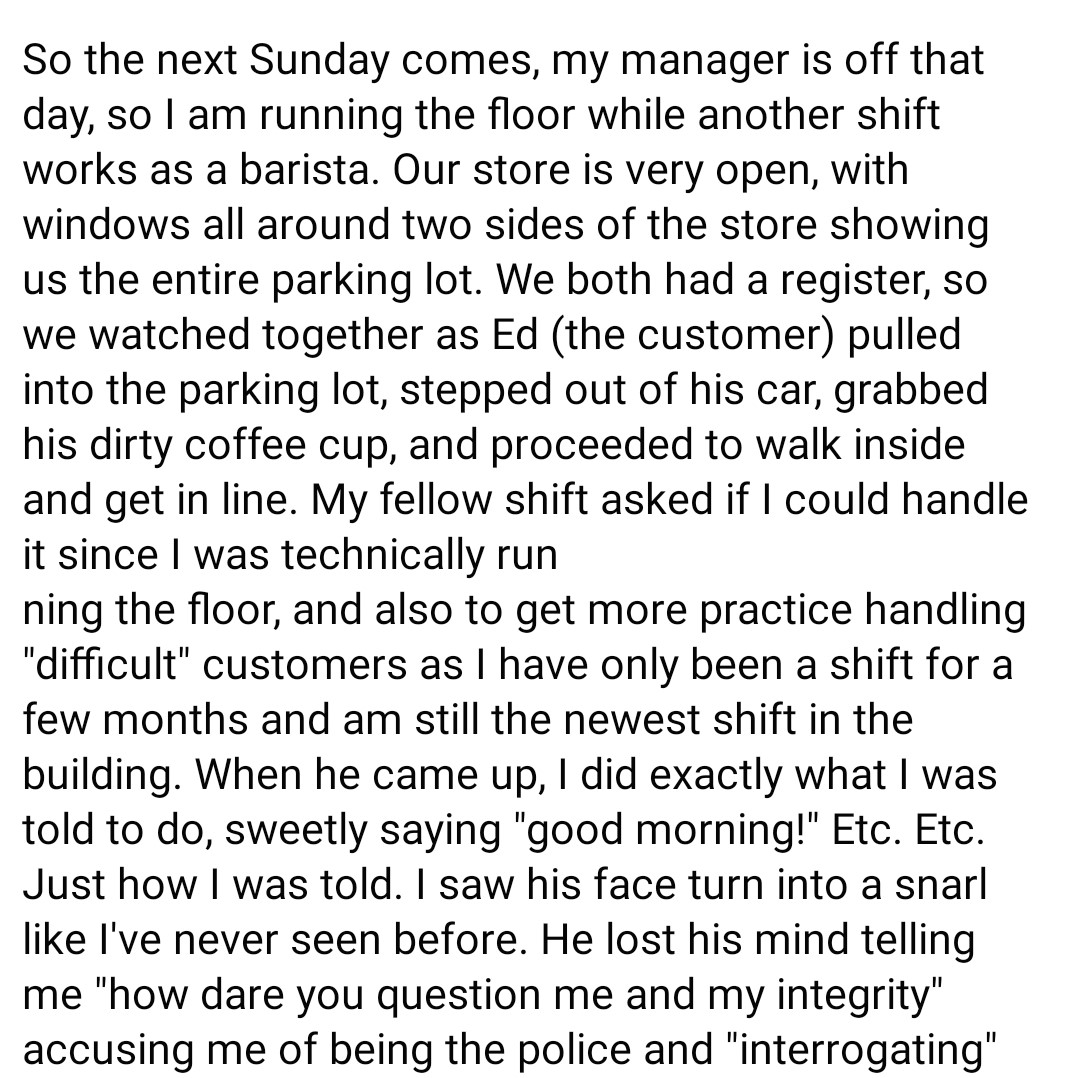 As a former member of the US Airforce where one of our core values is literally integrity, I think this man might be misusing this word. Frankly, it’s insulting. There’s no integrity in the act of cheating a business out of a $2 cup of coffee, and if you believe the price is unfair, you’re more than welcome to take your business elsewhere. No one is forcing you to buy our coffee, and making coffee at home would save you time and money anyway. Where’s the integrity in throwing a fit because you were caught in your lie?

*Lauren did exactly as she was expected to. She did not swear at the man nor did she threaten him in anyway. She did as she was instructed, but apparently this was not the “script” she was meant to follow. There’s no script when it comes to de-escalating a situation especially when the situation is not of the ordinary and when it involves a customer quite obviously in the wrong.

Unfortunately, the aftermath of this one cheating customer reached the barista in the worst way possible – through gossip. Once he came back, he spoke to her DM who later spoke to her SM.

Now, there’s no harm in gossip. Gossip like this where it clearly garners sympathy and worry for a fellow barista is purely out of concern. We all know how it feels to be berated and demeaned over a situation that is out of our hands. It was either crumble and forever give this man a free cup of coffee or uphold your values as a worker.

Now, this might be a parasite within Starbucks, but I think just about anyone who’s worked in either a food service job, a retail job, or a customer service job in general could feel some kind of way for this girl.

There was no right answer for this situation. There was no hero for this story. In the end, all anyone could do was accept that this was the outcome. The customer had won, and a hardworking barista had lost her job because of a cup of coffee. Personally, this not only goes against my morals; this should strike a nerve in just about anyone. Life, as we learn through our struggles, teaches us to defend ourselves at the appropriate moment. While we are told to stand in line and do our jobs, we are coached to know when enough is enough. We are taunted and deceived until we know our worth and what we are deserving of.

No one deserves this.

No one deserves to be taken advantage of because of an old saying like the customer is always right because they aren’t. In most cases, they are the furthest from right, but we are instructed, yet again, to stand in line, smile, and give them what they ask for.

Your cup of coffee is not a necessity you deserve. The ability to demean us is not a right. Had it been your child, you would have rung the bells of the injustice played out by entitled customers and how no one respects the working class. But this isn’t your child, is it? No, this is someone who takes up 30 seconds of your day whom you know nothing about. This barista doesn’t know your last name or where you come from. She doesn’t know if you have children or if you have a job. She doesn’t know anything about you.

And frankly, with the way this was handled, it’s enough to keep anyone from wanting to know anything about anyone ever again.

And before we start pointing figures, let’s remember that we love our customers. Sometimes, they brighten our days, and sometimes, we know it’s our job to brighten theirs.

But the parasites you’ve welcomed into our stores with open arms are doing more than enough damage to the partners you seemingly want to help.

Here’s the kicker: this man is no secret. Here is is on Dr. Phil, someone who I personally respect, flaunting his wealth. Starbucks let a man buy his way into their favor at the expense of a fellow barista.

This needs to stop.